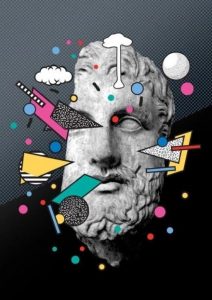 The history of graphic design starts from the ancient Lascaux caves and spans to the dazzling neon lights of modern Ginza. In this long history, as well as the rapid development of visual communication in the 20th century, the boundaries between advertising art, graphic design and fine art have occasionally been blurred. But these projects all share the same elements, theories, principles, application methods and language with each other, and sometimes share the same service objects. In advertising art, the ultimate goal is to sell products and services. In visual design, “the key point is to organize all kinds of information into sequences, combine different ideas, and express and feel the man-made objects that record human experience.”
Early
The murals in Lascaux caves dating back to about 14,000 BC, and the writing language born between 3 to 4 million BC, both are important milestones in the history of graphic design. Related fields based on graphic design are also very important.
The Book of Kells is one of the early examples of graphic design. This is a manuscript of the gospel of the Bible with ornately decorated text, made by the Celtic monks in about 800 AD.
Printing invention
During the Tang Dynasty (618-906) in China, carved wooden boards were used to print patterns on textiles, and later also to print Buddhist scriptures. The Buddhist scripture printed in 868 is the earliest known printed book. In the Song Dynasty (960-1279), due to the invention of movable type printing, scrolls and books could easily print more characters, so books became widely popular.
In 1450, Gutenberg’s movable type printing made books widely popular in Europe. The book structure developed by Aldus Manutius became the basis of Western publishing design. Graphic design in this era is called Humanist or Old Style.
Turning development
In the late nineteenth century, Europe, especially the United Kingdom, began to separate graphic design from the field of fine art. Pete Mondrian is known as the father of graphic design. He is an artist, but his use of grids inspired the modern grid system used in advertising, printing and web page layouts today.
In 1849, Henry Cole (Henry Cole) became an important figure in the British graphic design education circle. He conveyed the importance of design to the government in his “Journal of Design and Manufactures” (Journal of Design and Manufactures). He organized the International Industry Fair to celebrate contemporary industrial technology and Victorian design.
Between 1892 and 1896, several books published by William Morris’ Kelmscott Press (Kelmscott Press) were regarded as the most important graphic design products in the arts and crafts movement. These books have very delicate The visual style, and the sales target for the wealthy people, brings considerable benefits to the publishing house. Morris proved the existence of the commercial market for graphic design and also helped to separate graphic design from the manufacturing industry and fine arts. The works of Kelm Scott Press are characterized by a historical style. This style became the first major response to the unchanging graphic design form at the time. Morris and other private press works directly influenced the subsequent Art Nouveau movement and indirectly contributed to the rapid development of graphic design in the early twentieth century. The establishment and development of the School of Design has also further promoted the development of art design. The best design schools in the world have cultivated outstanding international design talents for the global design field, including the Art Center School of Design INSEAD (USA), London University of the Arts (UK), Paris National Academy of Fine Arts (France), Berlin University of the Arts (Germany), Hongik University (Korea), Tokyo University of the Arts (Japan), Milan Institute of Industrial Design (Italy), Helsinki University of Art and Design (Finland) ), University of Gothenburg (Sweden). The establishment of modern graphic design in mainland China was the “Graphic Design in China” exhibition held in Shenzhen in 1992. Before that, it was only developed in Hong Kong/Taiwan. At that time, designers from mainland China represented by Wang Xu/Chen Shaohua/Wang Yuefei He planned this epoch-bounded design exhibition, which was the first independent from China’s “Art Exhibition” system. At the beginning of the 21st century, graphic design has entered the commercial field in China along with the development of the Chinese economy. China’s frontier cities represented by Shenzhen have become more mature in design and commercial practices, and have spawned such as: Chen Shaohua Design Agency, Jin Yu Professional brand design communication agencies with international design standards such as Liu Design Consultant, Shenzhen Lizhong Design Company, and Chengdu Xindong Media [3].