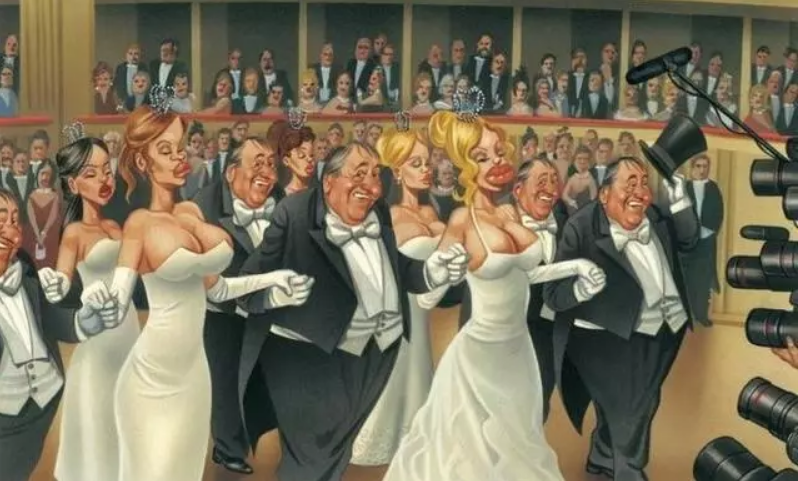 This illustration truly shows how boring and homogeneous the upper class society is. All men look exactly the same: ugly and fat. All women looked as if they had undergone assembly line plastic surgery. The so-called upper class society may not be as elegant and desirable as we see on TV. In the real world, it is much more ugly</ p>

The cruel reality about global warming is that if some organisms become much hotter than they can bear, they will not survive. This illustration shows an extreme version of global warming. The temperature became so hot that small animals began to burn</ p> 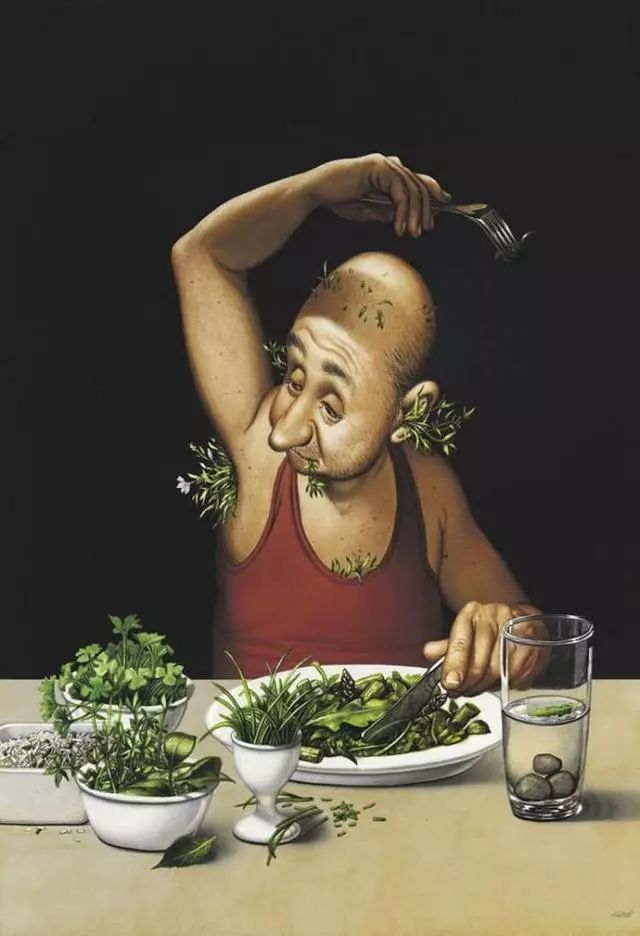 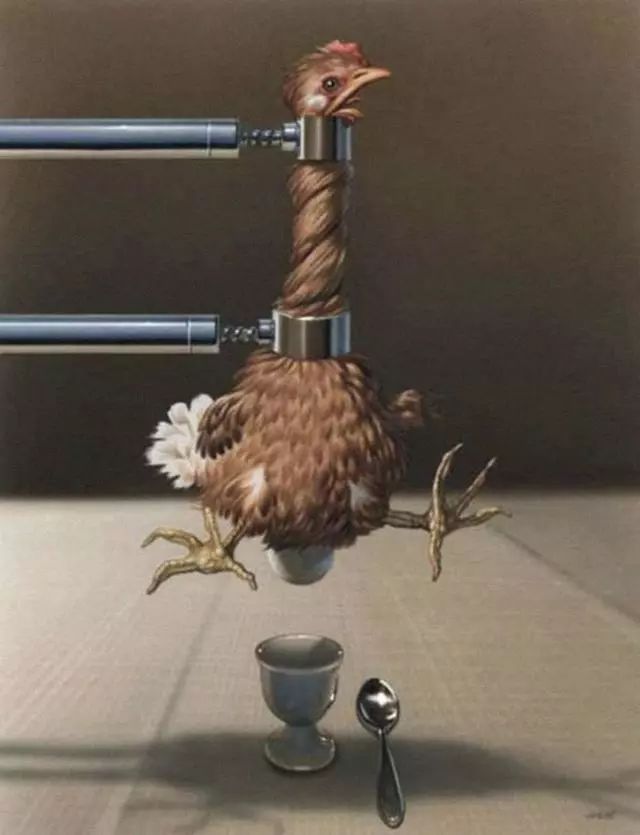 The exploiter and the exploited always exist at any time. Just like the hen forced to lay eggs in this illustration, under such terrible destruction, only to meet the exploiter’s breakfast</ p> 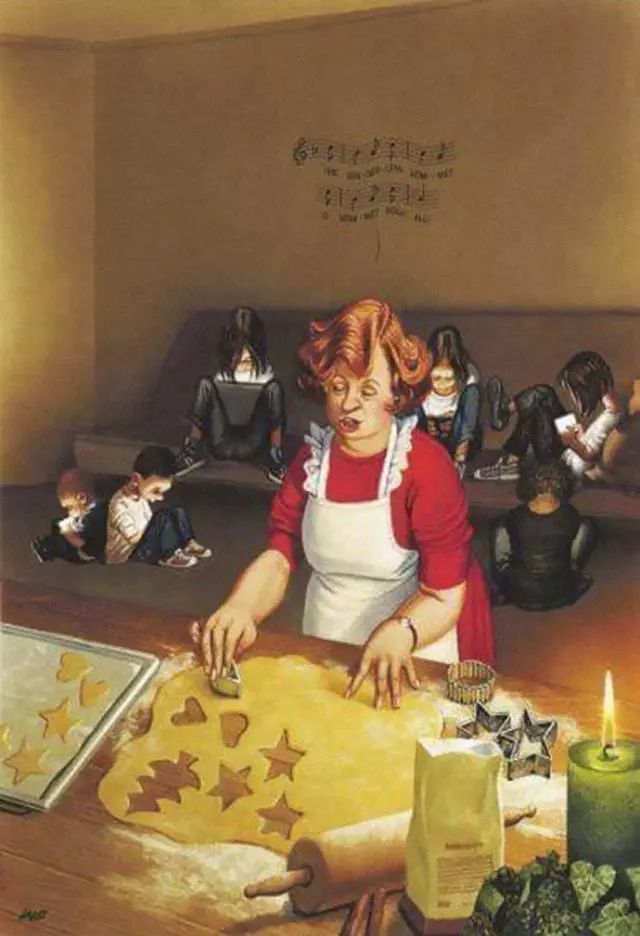 At first glance, the illustration doesn’t seem bad. The mother made cookies and the children were playing. Everything was peaceful. We seem to smell cookies. But when you look behind her, you will find the problem. Even though she tried her best to maintain the image of a good mother, the children in the room didn’t communicate much. They played more with their mobile devices</ p>

In the past, although there was no high quality of life today, families and children often gathered together to play games during the holidays. With the emergence of a new generation affected by modern intelligent devices, children seemed to become more quiet, less addicted to fighting, and more addicted to their own virtual world</ p> 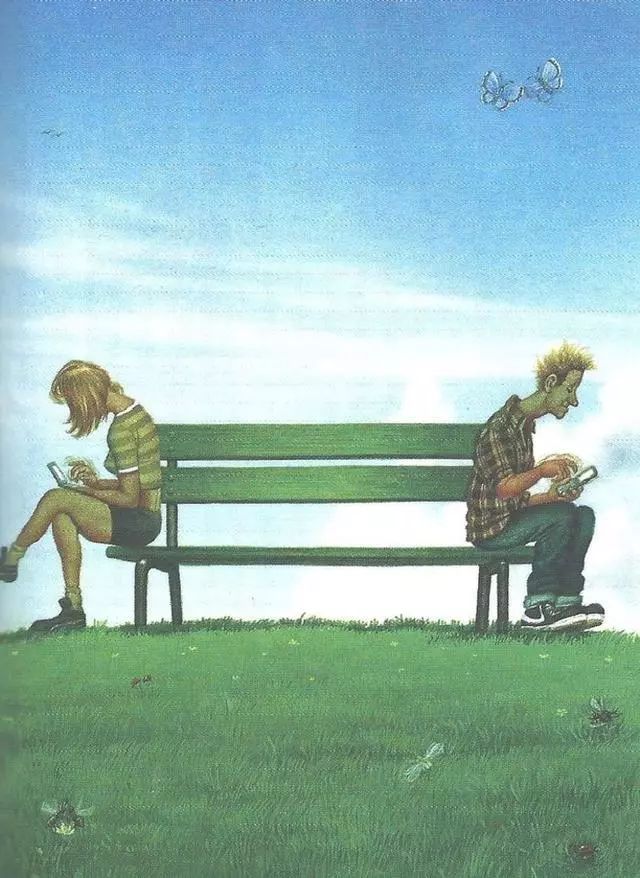 Sometimes, the good time we spend with our loved ones may be just watching a movie together, or walking together in the drizzle. But more often, we are attracted by the small mobile phone screen and ignore the romantic people in front of us. Mobile phones and other smart devices facilitate our life, but they also deprive us of a lot of fun in life. In the old world, if a couple sat on a bench, I believe they had a greater chance to hug each other and talk about all kinds of small things in life; In the modern world, couples on the bench will play with their mobile phones more and more, and even the distance between them is getting farther and farther</ p> 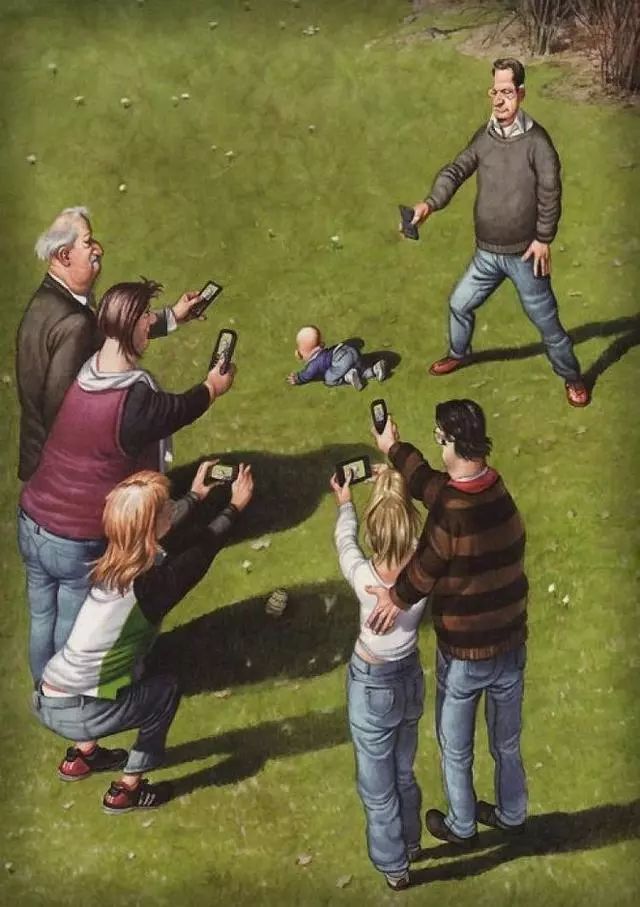 Have you ever noticed that children seem to be inseparable from cameras all their life? Cameras have existed for a long time, but in the past decade, with the continuous enhancement of smartphone functions, the number of cameras has also increased exponentially. They are not only in our hands, but also in the surveillance items around us. For many people, cameras are no longer a luxury. However, this will affect the child into adulthood. Their every move is recorded and judged by people all over the world. As the illustration shows, although everyone is filming the child, does anyone want to hold it? Children don’t need social media accounts. They need love</ p>

Young people make fun of old people who don’t understand how to use new technology, but you’ve never heard of the opposite way, have you? But in fact, young people will continue to be confused by old things. For example, an elder gives his child a washing board, but he doesn’t know what to do. But this little thing is also one of the simplest things in the world. If you are not used to it, everything will be confusing</ p>

In this illustration, we can see that teenagers are trying to understand the old TV. But they can use the computer very well. This may seem absurd to us, but this situation is very realistic. When we have new things, it is easy for us to forget and abandon the old things</ p> 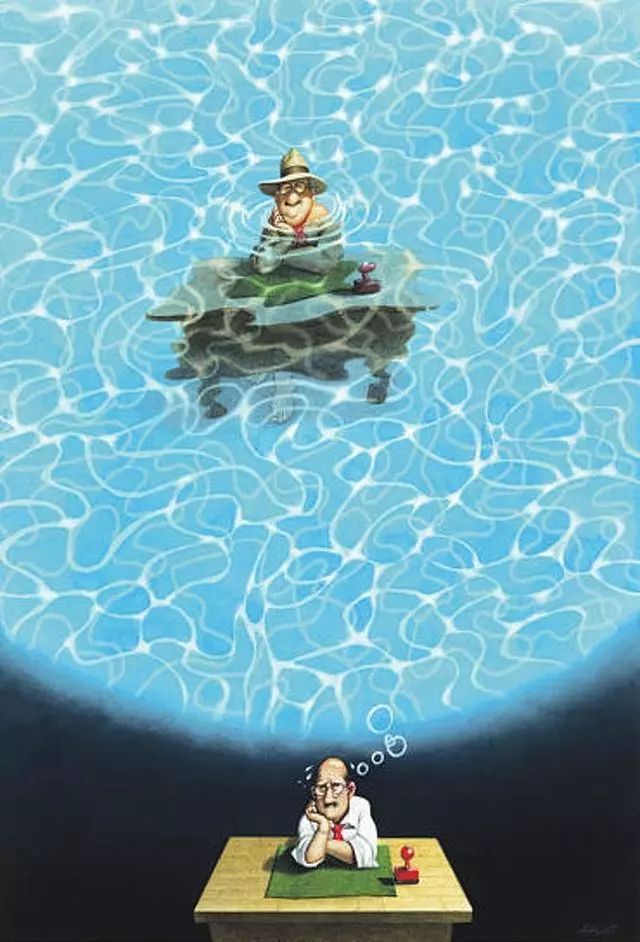 Life seems to be long and short, but no matter how you look at life, we should cherish our life. But many people don’t know how to cherish everything. They are often half hearted, perhaps because their work is not satisfactory, or they don’t like their work, which makes them have a lot of vacation fantasies at work. But life needs constant progress. There is nothing to complain about. You should grasp your own time. If mechanized work makes you feel sad, you can try to change a job, even if it is difficult; Or you can take a few days off and have a good rest and relax</ p> 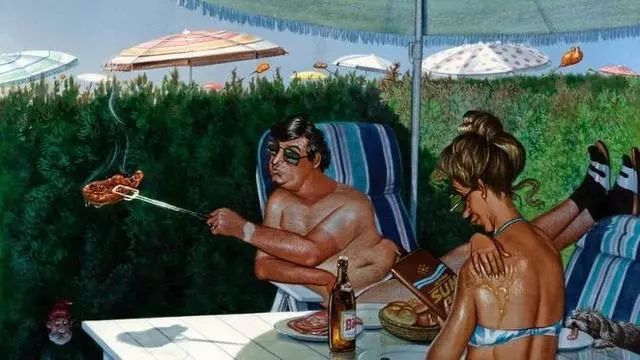 Like Figure 2, this illustration also satirizes the global warming caused by human beings. If one day the climate is really as terrible as seen in the picture, maybe people will start to get used to the hot heat and roast steak in the open air</ p>

Science and technology has brought convenience to life and pollution. Many people don’t understand the trouble that our TV and refrigerator will bring us in the future. Although those abandoned scientific and technological products will not be as threatening as those in the illustration, the threat it can bring is much more terrible than this. Because the accessories contained in most scientific and technological products are polluting, especially plastics that need hundreds of years to decompose, they are very common</ p> 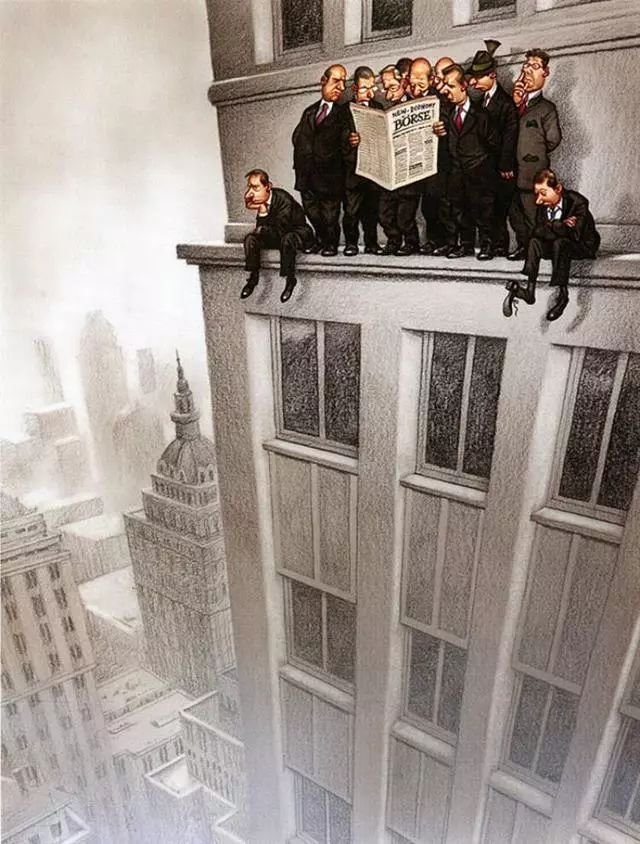 In this illustration, you can see that a group of stockbrokers are on the verge of danger. Some of them are so focused on their work that they don’t even notice their environment, while others seem ready to jump. Although chilling, this is indeed a great irony of the stock market</ p> 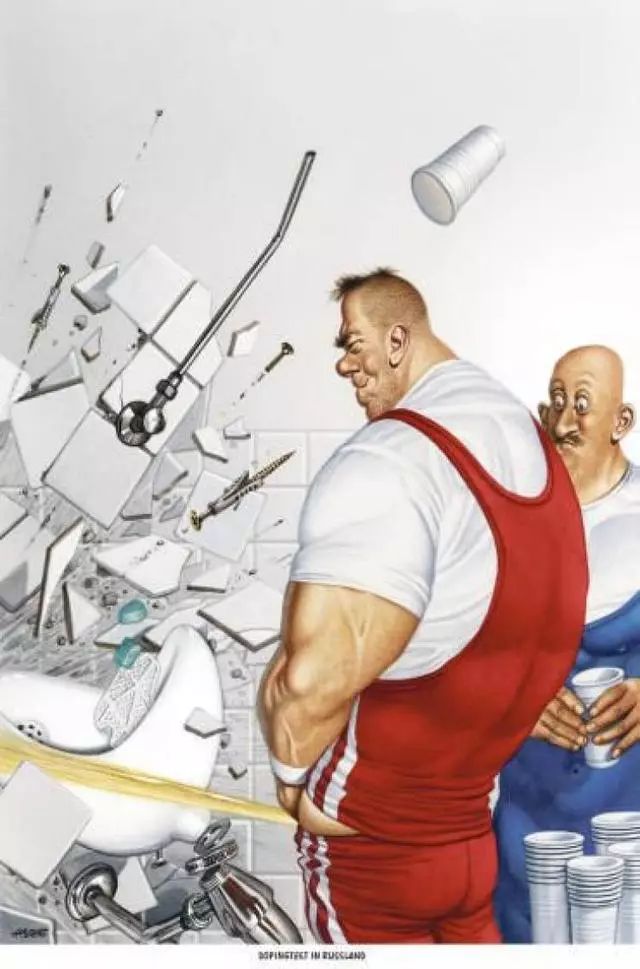 This illustration looks very dramatic. Many people will find this unreasonable and funny. But in fact, if you look carefully, you can find that this is an athlete. Ironically, there has always been the problem of athletes taking stimulants in the world</ p>